There is a world of different variations of automatic rifles ever existed on our planet.

For more than a century of evolution, numerous examples were produced and weapon standards have gone through a lot of changes and transformations.

We are not going to rate and compare all the rifles of the world. Only those, that you can try out personally during our Shooting tour in Kiev are under consideration. Fortunately, we possess the truly cult samples of the world arms industry, such as AK47, M4 (AR15), Steyr AUG. 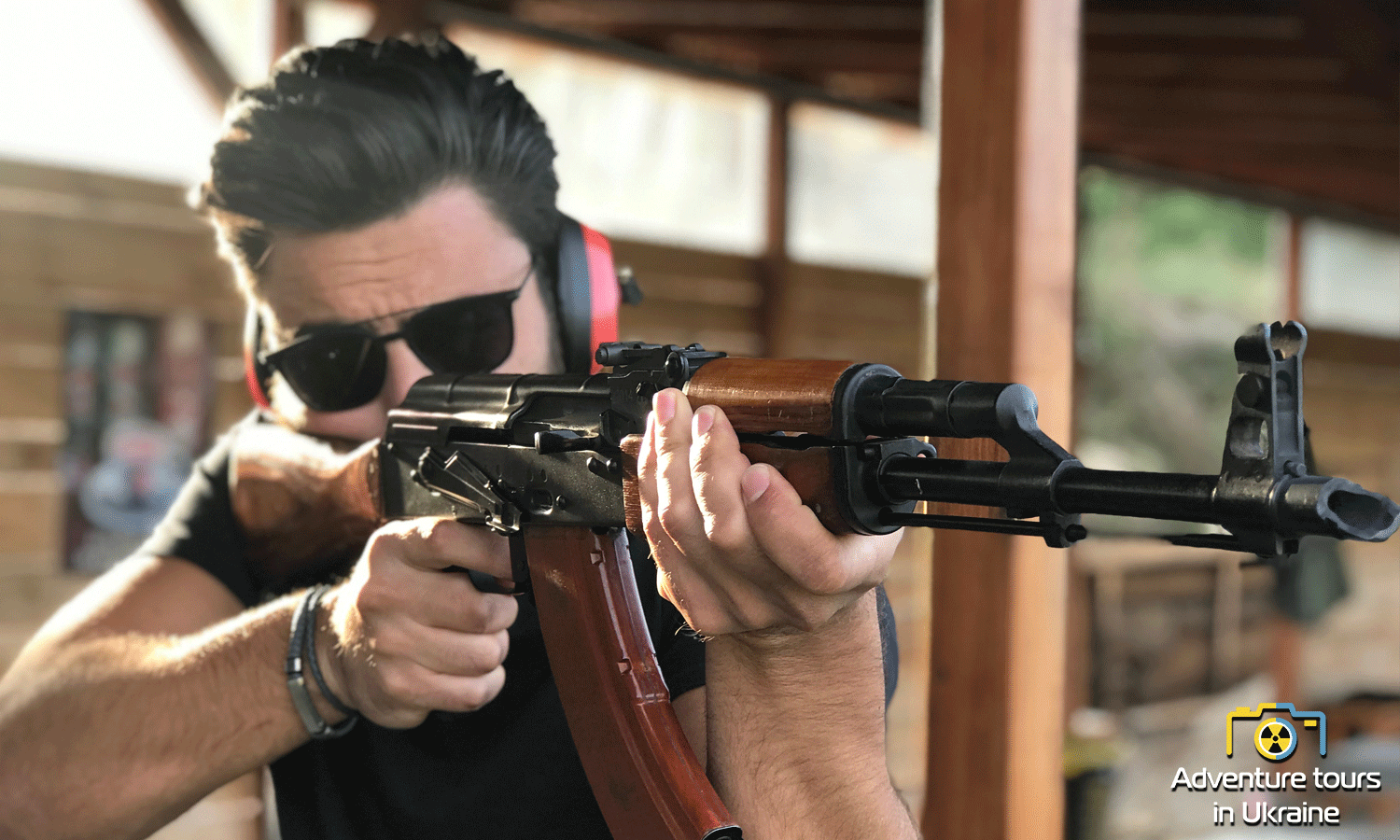 Literally, this is the most widespread and well-known weapon in the whole of human history. People name children, build monuments and prayer towers in the honor of Kalashnikov rifle. The AK is placed on national emblems and flags of several countries while mints picture it on the coins they produce.

The most popular model of the line – AK47 was developed in 1947 and was adopted in 1949. This makes it the oldest cult automatic rifle that is still in wide use in various parts of the world. It has a bunch of pros and cons which you can personally verify if you dare to try Kalashnikov shooting.

Among the main disadvantages of AK47 people highlight the general inconvenience in use. The handle and the butt stock of this weapon aren’t made in a handy shape while unwieldy safety lever and fire mode switch create a distinctive loud click. The relatively rough and ineffective sight mechanism is especially reflected in the accuracy of single shots. However, compactness and reliability of the design even in the harshest conditions as well as ease of use and maintenance make Kalashnikov assault rifle the most common weapon in the world. Try to shoot from AK rifle at our Kiev outdoor shooting range. 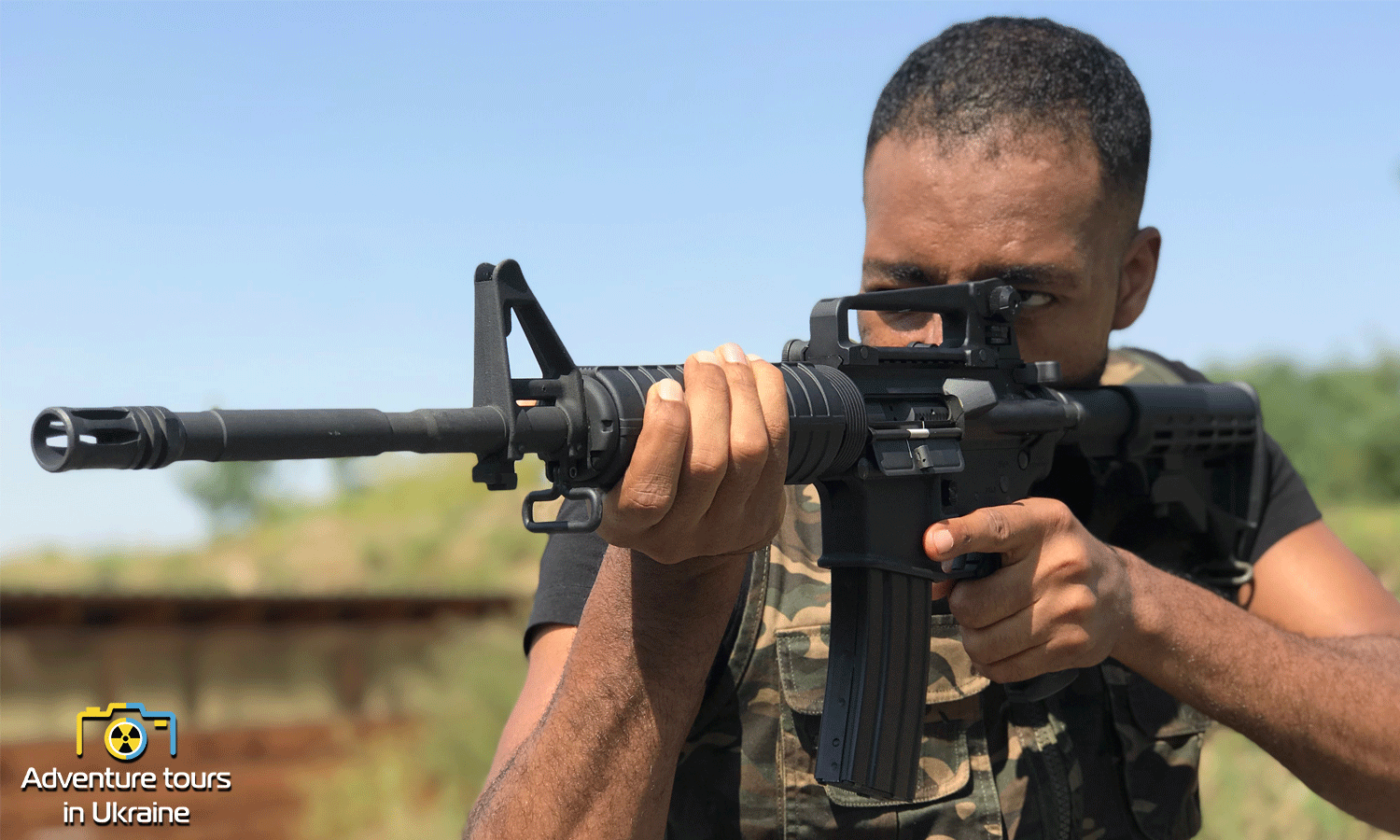 First developed in the late 50s under the name “AR15” later renamed the “M16” rifle is one of the most common models of firearms in the world. Same as AK47 this weapon was adopted in various countries around the whole world.

At our shooting range, you can personally try to shoot M4 carbine which is essentially a shortened version of AR15 rifle. This new sample of the rifle was primarily designed for the crews of combat vehicles and mechanized units as well as US special operations forces.

According to estimates of soldiers who served missions in Iraq and Afghanistan M4 is a rather reliable and easy-to-use weapon. Although, the endurance of this sub-machine gun is not as eminent as AK47 is famous with. M4 carbine requires quite more thorough care. However, this weapon is known with more solid sighting mechanism than AK and its magazines are lighter and stronger as well. 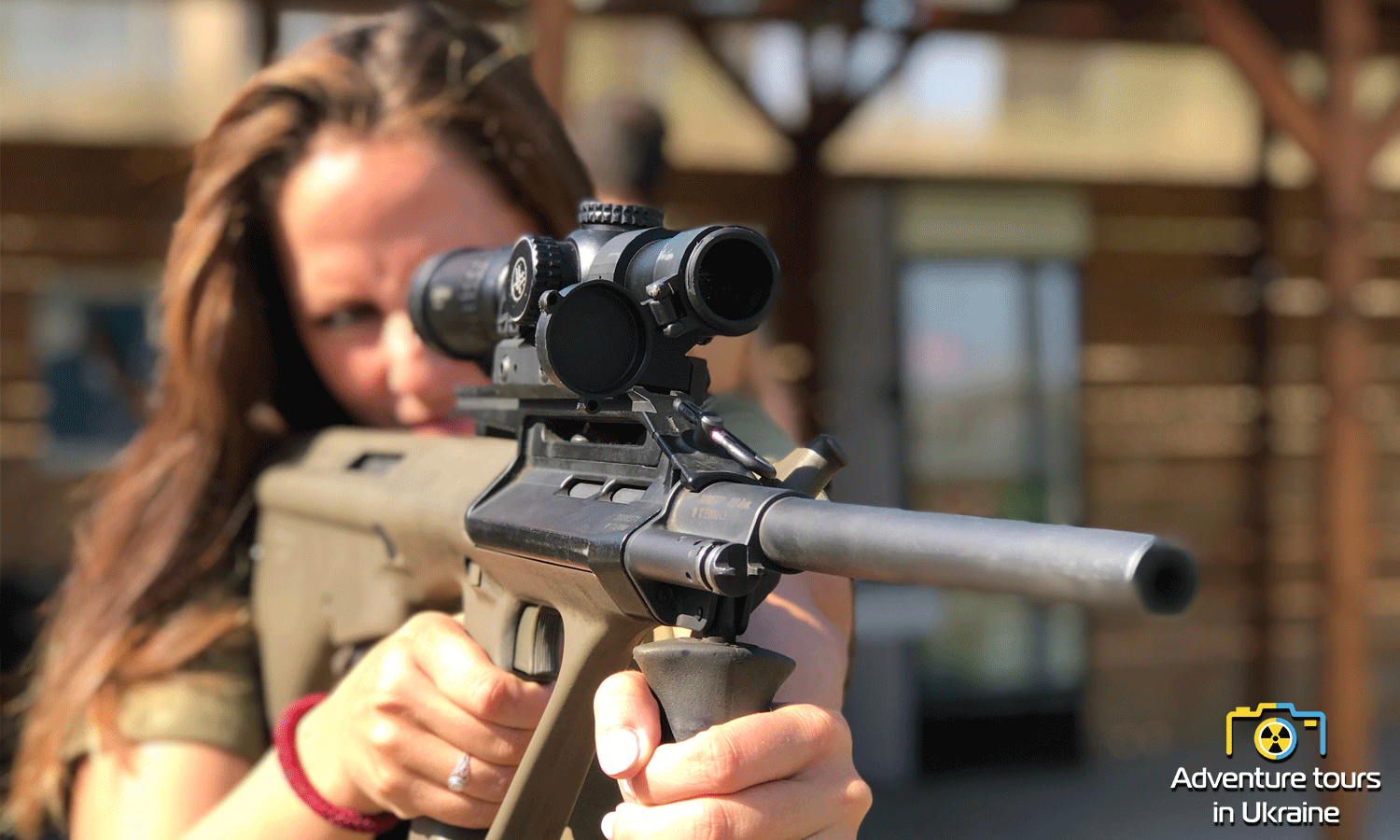 At the turn of the 60s and the 70s the development of a new assault rifle planned to replace the outdated models began. In those times Austrian army used Stg.58 rifles based on famous Belgian FN FAL. They intended to design a universal weapon that performs the functions of an assault rifle, submachine gun for special operations and mechanized units, and a sniper rifle at the same time. In addition, the weapon should possess a small weight, efficiency, reliability, and ergonomic design. The Steyr concern decided to create a modular design of AUG rifle what allows to convert it easily into a submachine gun or a professional sniper rifle if you have the necessary set of details.

In 1977 it was adopted as the Stg.77 model. It encapsulated the best ideas and constructions of that times and fully corresponded to modern tasks at trends. The bullpup system, telescopic sights of low power, plastic products, and the modular construction was successfully applied to create this splendid weapon.

For sure, it is much better to evaluate a weapon by deed, not by word. Luckily, at our private shooting range, you can always try each of these guns and choose who wins. Book a shooting tour to shoot from these legends of the world’s gun industry!